The little promotional stickers that advertised 51 Degrees, the solo show back in April, had a website on the reverse pointing to www.schudio.co.uk/51. Visitors to this page would have seen a few different panoramas during the show, but at the moment its the final rendition of the Cubic Experiment.

After my group show, Jibbering Art moved the cube outisde. I had to recreate the floor and the ceiling, this gave me a chance to fill up the design a bit more, going for almost complete coverage. The floor was a large piece of reverse lino that took to the Edding pens really well, and was ably laid down by Big Chris and Jon from Jibbering.

Other details were added to the upper walls and some of the ‘rear’ wall, opposite the slogan.

The final effect was more than satisfactory and it continued to conceal a few secrets of its own.

See the final cube in its own FULL PAGE window, no need to download anything to see it, all you need is Flash installed (which most browsers have nowadays, if not then go here.)

“The proteiform graph itself is a polyhedron of scripture.
There was a time when naif alphabetters would have written it
down the tracing of a purely deliquescent recidivist, possibly
ambidextrous, snubnosed probably and presenting a strangely
profound rainbowl in his (or her) occiput.— James Joyce, Finnegans Wake pg. 107. 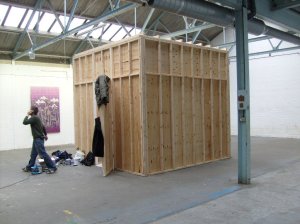 “Dr. Zellweger’s background is a combination of formal education and extensive research in the fields of Psychology, Pedagogy, Semiotics and Logic. Beginning in 1949, Dr. Zellweger spent his summer at the Institute of General Semantics with Alfred Korzybski. In 1975 he spent one year at the University of Illinois, Biological Computer Laboratory, under the direction of Heinz von Foerster. — http://en.wikipedia.org/wiki/Shea_Zellweger