I made a short introduction to RAW360 by way of describing ‘the tale of the tribe’ and how, in my humble opinion, raw360.net presents a new medium by which to process the encyclopedic and the epic, in literature, poetry, and historicism.

360 PANORAWMA AND THE TALE OF THE TRIBE.

(An overview of TTOTT synthesis in the age of web 2.0)

Over the last ten years, in the company of a sleepless band of independent researchers, I have been tuned onto special information processing of The Tale Of The Tribe (TTOTT) developed exclusively by Dr. Robert Anton Wilson (1932-2007).

Today in July 2011 we embark on a whole new way of communicating some parts of RAWs ‘Tale of the tribe’ by introducing new ways of seeing and new ways of navigating ‘information processing spaces’ spaces that reflect the architects that RAW highlights in his TTOTT foundation.

The multi-sensory experience of interacting with the new ‘info-process tools’ feature flash based 360 panoramas and embedded media in a way that ploughs the language for the appropriate inspiring flow.

I walk in the footsteps of those writers whom wish to show delight in the limitations and boundaries of the art form. Visit any major writers website and be confronted with audio, video, texts and hyperlinks, the sum total of which, I feel, often overshadows the individual media by which they maybe regarded. (a moving picture with surround sound audio of Dali’ painting, for example, may exceed the attension span of most domesticated primates who ‘see’ his static paintings, although they move the mind more than most!

A new synthesis has emerged amidst the convergence of information technology, social networking and the will to share, and what we are doing with the PANORAWMA is making a new synthesis explicit and demonstrable by example. Look and see, click and watch, read, listen process. I feel that in 2011/12 we can build special ‘information processing tools’ that are designed to interact with a special individuals ‘programming’ and ‘programmers’ and what better place to build a foundation other than that started by Dr. Robert Anton Wilson?

Together the ‘programming’ (that maybe defined as the principles and methodologies distilled from the works of RAW) and the ‘programmers’ (in this special case scenario the dozen or so characters from RAWs TTOTT) produce a remarkable comprehensive super-computer: an operating system that includes the unique mixture of innovations that we get from study of the tale of the tribe, a new global epic including history and magic.

Here I shd. offer a word on why you must read on and how RAWs TTOTT  harnesses a lifetimes study in what I, and many scholar activists alike; consider the most important and critical ‘information skills’ to help planetary humanity, make it together and explore mind, earth, space (inner/outer) and each other in harmony.
Dr. Wilson read and processed each of the characters in his tale of the tribe over a period of approx’ sixty years. SIXTY YEARS, with a taoist modernist method of processing these characters, balanced progressive and featuring suspended judgement, multi-valued logic, poetic surprise principles and cybernetic mathematical balance.

RAW exhibited a beautifully appropriate 21st century ‘programme’ of humanitarian information processing with a witty creative edge long long ago, and, I may add defined lawyer run capitalism, banking syndicates and secret societies, simultaneously with ‘quantum psychology’ and ‘the eight circuit model of consciousness’ with the likes of Dr. Timothy Leary. He helps place you, the reader, interactor in the driving seat enabled, better informed.

RAW refused to step down or stop striking his hilariously precise blows at the greedy and corrupt  mummerjumpers who block and sabatage innovation, free-trade (in its proper sense), and art-run humanism from breaking out across planet earth tomorrow, and out into the greater solar system maybe in a matter of months.

I think that the least we can do might consist of correlating some of his favorite innovators and humanitarian artists into a RAW universe, (PANORAWMA: a place that reflects RAW through the people he expressly named running together in a rogue gang, a sleepless krewe consisting of magicians, historians, writers, poets, film makers, linguists, media theorists, design scientists, comedians, heretics, all raving together in a big soup, engineered into cyberspace by the greatest living web 2.0 geniuses and visionary artists actively building the PANORAMA right here, everywhere and nowhere at once.

The precise and equalibrius writing of RAW naturally provides such a synthesis, and his books and articles remain testament to this comprehensive wholism as deployed through the medium of literature. The PANORAWMA project reflects the process of making a movie in comparrison with writing a book. We are building an interactive Universe where activities and events take place through multi-media synthesis: video, image, text, audio, game play.

In my opinion the key to building a harmonious Universe lies in the inter-connectivity between all of its parts, and the tale of the tribe by RAW seems to have been developed to exploit this inter-connectivity, where any of the charcters can be processed and permutated with any other to produce meaningful and complimentary mixtures. The art of mixing and of juxtaposition, however, often requires a very special touch, a rhythm and timing and sense for improvisation, to then travel the posible pathways, the choices, and analyse the path of least resistance, or that which resolves the immediate sense of opposing forces. Enter the poet, enter the painter, enter the photographer, enter the programmer, creating together to balance the equation: language vs. The equation. 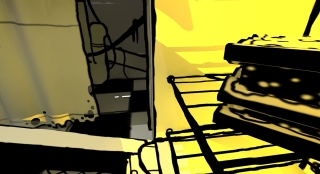